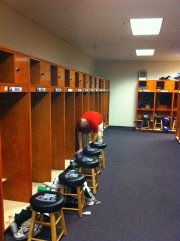 “Our company, along with our partners, has been in contact with numerous colleges around the country interested in replicating TCU’s success in battling dangerous infections.”

Earlier this month, S2O2 acquired Zero-Blast, a Texas-based company that specializes in advanced, anti-microbial coatings for germ-infested environments such as college sports locker rooms. Its top product, Armor-Blast, is a polymerized organosilane that bonds to surfaces and forms a barrier that kills germs, microbes and pathogens on contact. The safe, non-toxic coating needs only to be applied four times a year in order to provide 24/7 protection from staph, MRSA, e. coli, H1N1, black mold, athlete’s foot and more.

Zero-Blast has been working with TCU for four years, beginning with the sanitization of the school’s football facilities and equipment. The Armor-Blast treatment worked so well that Zero-Blast was hired to apply the same treatment to basketball, baseball, volleyball and soccer facilities, as well, including indoor field turf.

“TCU has been the perfect test case for this technology,” said NTRR CEO Sydney Jim. “Our company, along with our partners, has been in contact with numerous colleges around the country interested in replicating TCU’s success in battling dangerous infections.” Read more

Searching for the Magic Bullet Against Cancer Caused by Asbestos: One Step Closer?

Mesothelioma is a very aggressive cancer associated with asbestos exposure, which is usually diagnosed in an advanced stage. So far no therapeutic strategy has proven effective against this deadly cancer and the prognosis remains very poor with only few exceptions.

In December, the research team of Antonio Giordano, an internationally renowned pathologist, Director and Founder of the Sbarro Health Research Organization in Philadelphia, PA (www.shro.org) and Professor of Pathology and Oncology at the University of Siena, Italy, published two separate studies aiming to address the urgent need to identify possible new methods for mesothelioma treatment. Read More

The owner of a Nottinghamshire alloy firm has been sentenced for failing to protect workers from the risks of lead poisoning after three employees became seriously ill.

He had been working with his two colleagues at the Boughton-based company making lead sheeting from molten lead. His job was to scrape off the solid impurities, or dross, in a crucible containing the molten lead and pour the excess into containers.

Mr Northey was hospitalised for three weeks in May 2011 and continued to receive treatment for over a year. He was also off work for a year and can never work with lead again.

Prior to being diagnosed with lead poisoning he had been admitted to hospital with renal problems.

A subsequent investigation by the Health and Safety Executive (HSE) found conditions at Mr Brown’s company were so bad that a Prohibition Notice was served halting all work with immediate effect.

HSE also established that lunch breaks were taken in an old, lead-contaminated caravan with no running water. Water was collected in contaminated plastic milk cartons from a contaminated hand washing area in the workshop. Clothes worn for work were not removed before eating and drinking and there was no toilet facility at the factory.

Staff had not been told about the effects of lead or how to recognize the symptoms of over-exposure. Read More

The beautiful two-story stone-faced Sheboygan County home with the impressive Lake Michigan view was supposed to be a retreat for Mequon resident John Liebl and his wife, Beth, once they retire.

Instead, the couple are now seeing well over $250,000 of their retirement savings vanish to remedy and replace rotten exterior walls. The Liebls’ contractors say it’s a warning tale to every home buyer about the damage that can result when cheap building materials are combined with questionable workmanship.

“This was to be our weekend retreat. It’s turned into a nightmare,” John Liebl said. “What the guys are telling me is, had we not discovered this, in three to four years it would have been a complete tear-down. I don’t think we have any recourse.”

Bruce Nordgren, partner in Mequon-based Northgreen Builders LLC, which is now rebuilding the Oostburg-area home, calls the Liebls’ experience “a prime example of what’s going on in our industry.”

He predicts many more mold cases will come to light in the coming years.

“I’ve been building for 37 years now. I’m horrified by what we’re doing as a construction industry,” Nordgren said. “We’ve got to start looking at some of the things we’re doing….

“In the last five years, we’ve repaired so much stuff. It’s the products that we’re using. It’s the techniques, it’s all kinds of things. If it doesn’t change, (this) is going to happen.”

A home inspection before the Liebls purchased the house, built in 2004, in September of 2010 uncovered only minor defects. Those were remedied and the couple moved into the home, which was fully decorated and painted. Beth noticed a musty smell, but nothing showed.

It wasn’t until September 2012 when the Liebls hired Northgreen Builders to enclose the courtyard of their U-shaped house that signs of trouble appeared.  Read More 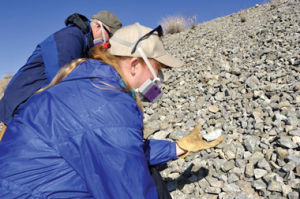 Removing asbestos from an old building can be hazardous and expensive. So what happens if the ground outside is covered with the stuff for miles around?

That’s what a team of UNLV geologists is trying to figure out after the surprise discovery of potentially toxic, asbestos-type minerals in rocks and dust from Boulder City to the southeastern edge of the Las Vegas Valley.

A peer-reviewed study detailing the find was published last month in the journal of the Soil Science Society of America.

So how worried should everyone be?

“At this point we know enough to know there is a hazard. We don’t know what the risk is,” Buck told the Las Vegas Review-Journal. “There’s a lot of work that needs to be done. Until we know more, it would be a good idea to avoid dust from those areas.”

That could be a tall order.

The study area takes in all of Boulder City and a wide swath of the Eldorado Valley, with tendrils that reach to the shore of Lake Mead and into the oldest parts of Henderson.

“It’s not everywhere, but I think you’re going to have a hard time not finding it,” Buck said. “In every sample we looked at we found it. We found it pretty easily, too. I didn’t have to look very hard.”

For one test, Buck spent about three hours walking her horse along a dirt road in Boulder City. When she was done, she found asbestos fibers on her pants and her shoes.

“The last thing we want to do is upset people or cause a panic. But on the other side, we don’t want to give people assurances we can’t give,” said UNLV geologist Rodney Metcalf, who partnered with Buck on the study. “We can’t in good conscience say there’s no problem.”

The long, thin minerals were forged roughly 13 million years ago in the roots of volcanoes, also known as plutons. “Boulder City sits on top of one of these plutons,” Metcalf said.

The fibers have been weathering from the ground for the past 12 million years or so, giving them plenty of time to spread out, Buck said.

She specializes in something called medical geology, basically the study of the health impacts of minerals. She was in the midst of sampling arsenic in the dust blowing from Nellis Dunes when she came across a fibrous mineral in one of her samples. She later started talking to Metcalf about the asbestos-like fibers he was studying in northwestern Arizona, and the two decided to go looking for trouble in similar rock deposits in Southern Nevada.

What they mostly found was a mineral called actinolite, one of six types of asbestos regulated as a toxic substance by the U.S. Environmental Protection Agency. Read More